Our Belgian Malinois Puppies For Sale are smart, confident, and versatile world-class workers who forge unbreakable bond with their human partner. Malinois dogs have strong protective and territorial instincts. 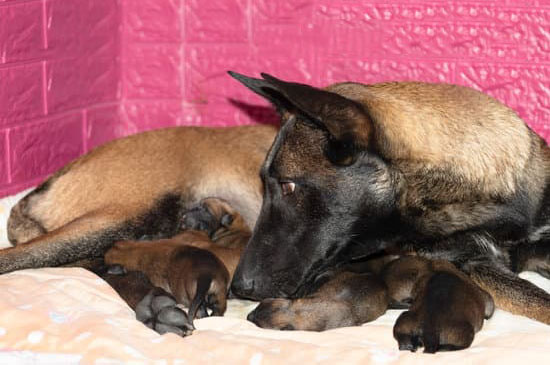 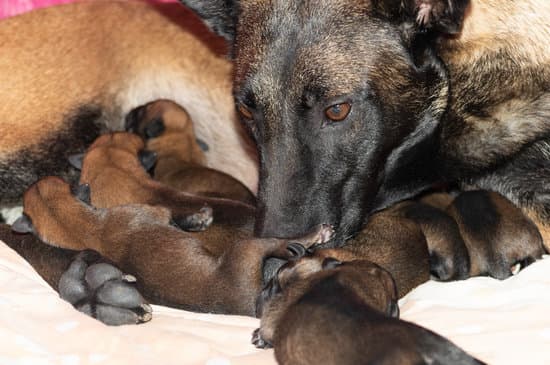 We are a family-owned and managed business, that takes good care of Belgian Malinois puppies for sale, with their health being our top priority. We are well respected breeders and have gained the trust and confidence of many families who have relied on us to help them find the best four-legged companions. For us breeding is a family affair and our children who are 16, 14 and 5 years old, take pride in taking care of and training the puppies before they go to their forever homes.


Our children teach our Belgian Malinois social interactive and basic obedience skills and they also start the potty training journey. This makes for a smooth transition for the new owners. Our kids are always a little sad to see a pup they took care of go to their forever homes, but they are also very well aware of the joy and happiness their little furry friends will bring other families, and knowing they played a part in it makes it all worth it for them. We help families get healthy, cheap, and affordable belgian malinois puppies.


While our puppies are amazing at companionship, they also excel in service, obedience, therapy, outdoor recreation, and much more! If you are looking for an Malinois puppy that is easy to train, and sometimes too smart for its own good, you’ve come to the right place!. We value friendliness, respect, and timely response to every inquiry. we take pride in the service we provide. Because of this, our puppies will join your family with current and age-appropriate vaccinations, deworming and a full health veterinary check before coming to their forever home. Our puppies have been requested all over North America and Canada due to their quality. Feel free to contact us!

Belgian Malinois are perfect for people wishing to own a highly trainable, versatile, super-smart dog that can work/play “till the cows come home”. If you have the time and commitment for an Malinois, you won’t be disappointed. These special dogs deserve special owners. Their loyalty, drive, character, and whimsical sense of humor place them in a class by themselves.

All puppies purchased from us are; 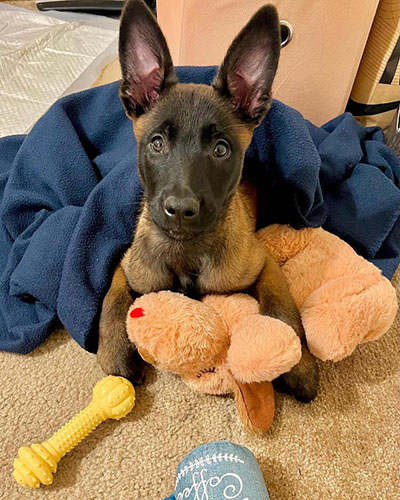 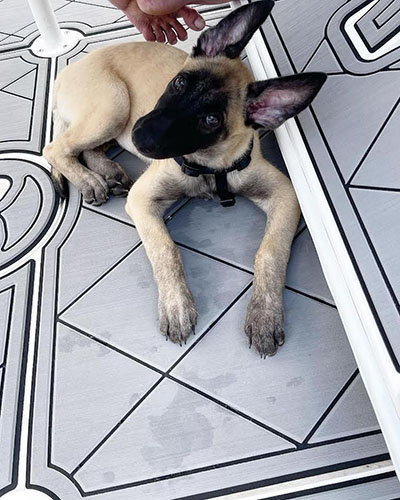 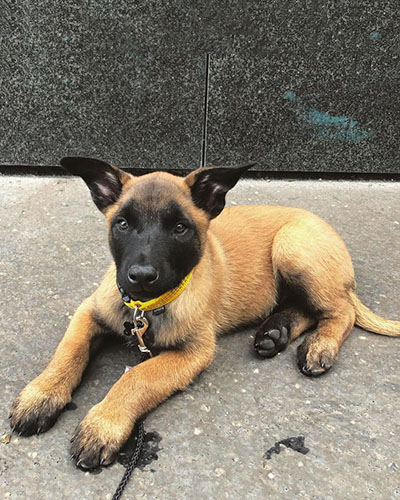 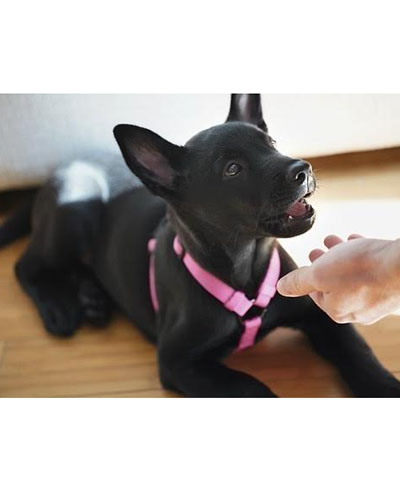 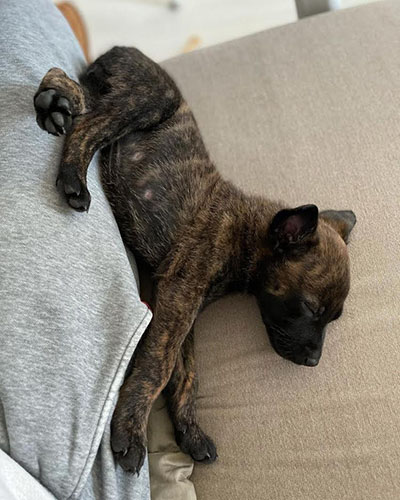 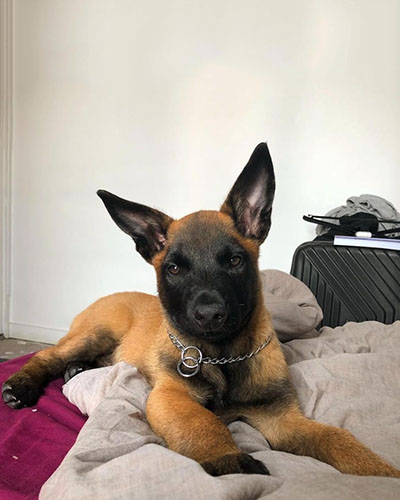 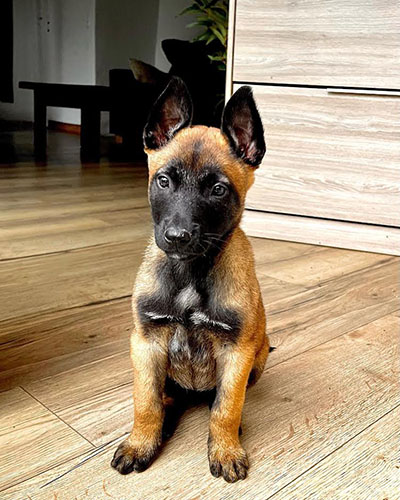 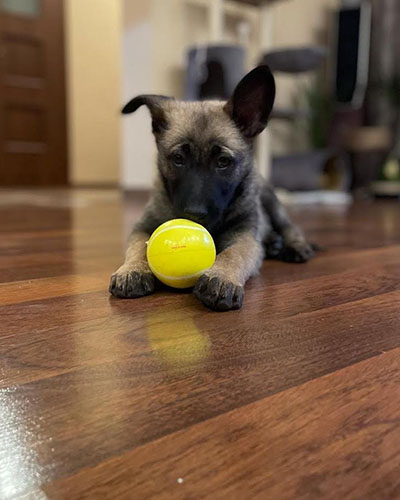 What our clients are saying!

We couldn’t have been happier with the service, communication and resources from Intelligent Belgian Malinois! Our new little guy, renamed BOOTS is such a welcomed addition to the family! He is growing so quickly and is so smart! He even figured out a new game he got for Christmas already! I would use Intelligent Belgian Malinois again in the future and really valued the white glove service we received.

What a great experience and a wonderful puppy. We really appreciated the care they gave in transporting and delivering him to us. The puppy cab driver had a really difficult and long drive but seemed super happy about delivering our puppy.

We had a great experience with Intelligent Belgian Malinois. They were helpful with any questions or concerns we had. My Malinois puppy Zena is a pure joy to have in our family.

Very helpful finding and purchasing my new puppy. I picked up my puppy in St. Louis at their Intelligent Belgian Malinois hanger and the staff there were awesome. I was also sent a fantastic new puppy package with a bed, toys, leash, very soft blanket that she loves and food/water dish that was totally unexpected and very welcome.

I got our puppy—Benji from Intelligent Belgian Malinois, we feel that they are very professional and kind. Everything was wonderful and they took care of every detail. I appreciate very much their great service!!

The Temperament of our Belgian Malinois Puppies For Sale

Belgian Malinois Dog has intense intelligence and high energy. These dogs are almost always on the move, and without much exercise and stimulation, they quickly find ways to keep themselves entertained. This breed isn’t the best choice for a first-time dog owner, nor is it ideal for someone who prefers watching TV over more active pursuits. Get healthy Belgian Malinois puppies for sale from us today.


Individual temperament varies, but there are some general characteristics. The dogs are often quite aloof with strangers, but they will make friends once it’s clear that someone new is welcome in your home.


These dogs take the task of guarding home and family seriously and will be highly protective once bonded with you. While the dogs are attentive and can be very good with kids, it’s important to note that not all Malinois have the right temperament to be a family pet and share a home with small children. Let us help you make the right puppy choice for you. Our Belgian Malinois puppies for sale are ready for rehoming.

After buying a Belgian Malinois Puppy from us, living with it is another thing. The Belgian Malinois is a very smart and obedient dog. He has strong protective and territorial instincts. This breed needs extensive socialization from an early age, and firm, but not harsh, training. Belgians are instinctively protective so they should be trained and socialized very well from an early age. Unless you are specifically working in a protection sport, you do not need to give your Belgian any protection training, as it will come naturally to them. Belgians make excellent pets for the right homes, as they thrive on loving companionship. Malinois instinctively display herding behavior such as chasing and circling, moving effortlessly for hours and nipping at people's heels. The dog is good for working and competitive obedience, but not for toddlers who run and scream. A Belgian Malinois will constantly be trying to keep the toddler in one spot!


The Belgian Malinois can live in an apartment if it is sufficiently exercised. Moderately active indoors, he will do best with at least an average-sized yard. He prefers cool climates, but readily adapts well to others. A Belgian Malinois should live to be 12 to 15 years.


How to train an adopted Belgian Malinois Puppy

Adopting a Belgian Malinois Puppy is a very lovely and training should be introduced from a young age so that the puppy understands the basics of obedience and good manners. However, stubbornness is a characteristic of the breed, and most Malinois breeders have their own strong opinions about how they should behave. Rather than creating an adversarial atmosphere between owner and pet, training should be approached in a positive and patient manner, with the understanding that progress may be slow, but that persistence will pay off in the long run.


If you’re adopting a Belgian Malinois puppy, be sure to socialize them by exposing them to many people and different situations and friendly dogs while supervised.


Socialisation is particularly important, for the defensive behaviour of the Belgian Malinois toward strangers can become a worrisome problem in strong-willed individual dogs, particularly males. Attending puppy parties once the initial vaccination course has been completed is a great way to begin to socialise a young dog, and the organisers (often veterinary nurses) will usually be happy to provide guidance for new owners on training their mischievous bundle of fluff.


Exercise and Activity Levels of a rehomed Belgian Malinois Puppy

After rehoming a Belgian Malinois puppy, daily exercise is required; Long walks — at least 40 minutes to an hour per day will do the trick if you’re not into running. They quickly become destructive without plenty of exercise and exciting chew toys. Stop to think about whether you’re prepared to provide the necessary amount of activity for a Belgian Malinois.

Regarding exercise, leisurely walks don’t cut it unless you adopt a senior dog. These dogs require intense play sessions and plenty of running, either on their own or with you.

Caring for your pet, including frequent brushing and bathing, will keep your dog’s short-haired coat looking and feeling its best. Even with grooming, you can expect your dog to shed a bit.

Because the dogs have double coats, the undercoat will “blow” or shed twice annually, creating quite a mess if you don’t stay on top of things. Like all other dogs, this breed needs to have its nails trimmed regularly. Pay close attention to the dewclaws since activity doesn’t wear them down like the rest of the dog’s nails. Don't miss out, we have healthy Belgian Malinois puppies for sale today.